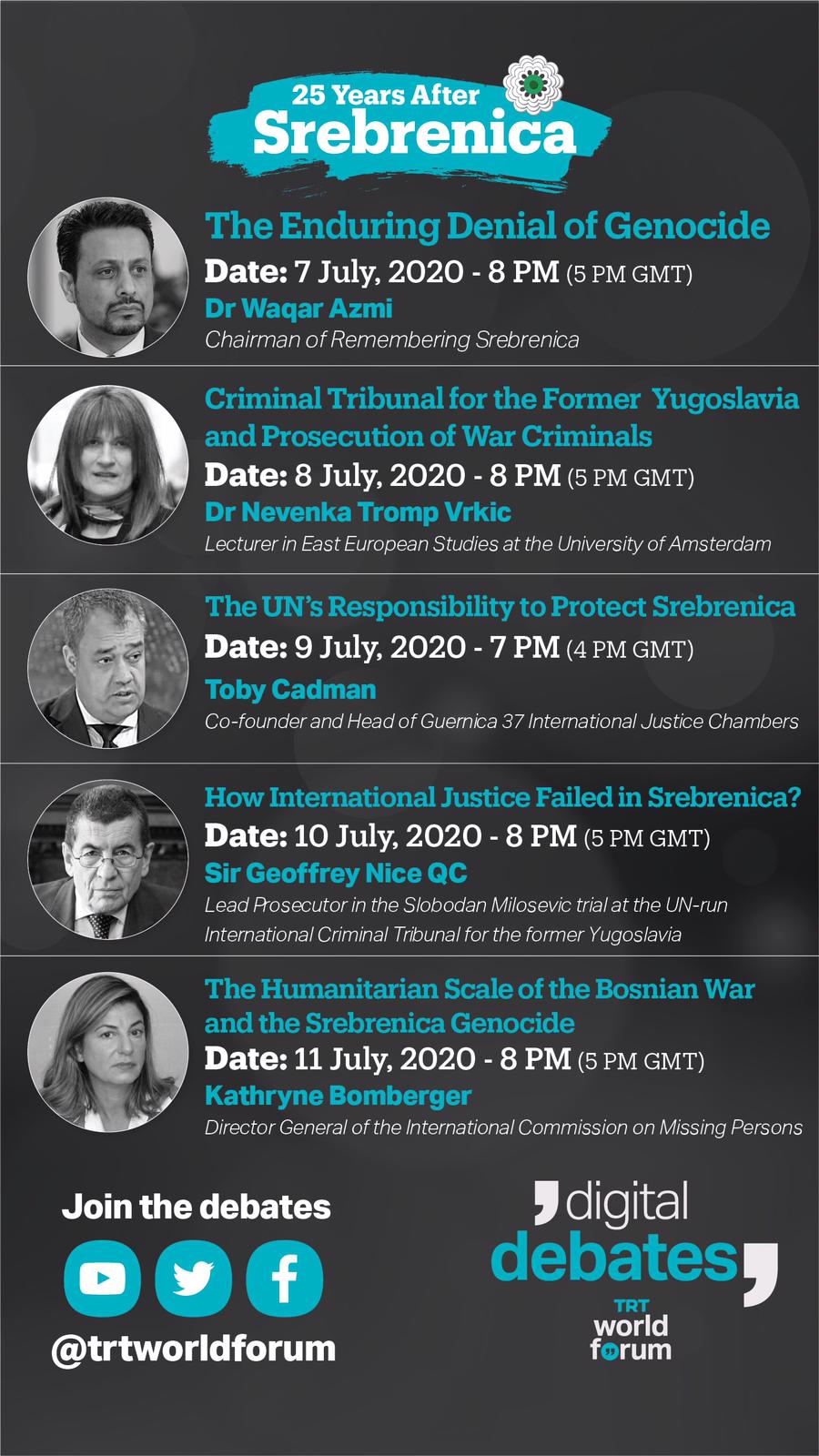 Marking the 25th anniversary of the Srebrenica Genocide, as part of a week-long discussion series with the participation of special guests, Digital Debates discusses human rights, war crimes and the effectiveness and challenges of the implementation of the ‘Responsibility to Protect’ principle in an effort to help prevent massacres and genocides.

The first session will take place today (Tuesday, July 7) at 5:00 pm GMT (8:00 pm local Turkey time) with the attendance of Dr. Waqar Azmi, Chairman of Remembering Srebrenica to discuss the ‘The Enduring Denial of Genocide’.

The session seeks to address the obstacles hampering reconciliation, the strategies used by genocide deniers, as well as questioning how Republika Srpska’s ongoing calls for secession affect reconciliation?

The other sessions are listed as follows:

July 8th at 5:00 pm GMT: ‘Criminal Tribunal for the former Yugoslavia and Prosecution of War Criminals’ with Dr. Nevenka Tromp Vrkic, Lecturer in East European Studies at the University of Amsterdam.

July 11th at 5:00 pm GMT: ‘The Humanitarian Scale of the Bosnian War and the Srebrenica Genocide’, Kathryne Bomberger, Director General of the International Commission on Missing Persons.

Everyone can join the sessions:

The sessions will be broadcast online on TRT World Forum’s social media accounts. Attendees are encouraged to address their questions during the live Q&A sessions.

What happened in Srebrenica:

In July 1995, half a century after the Holocaust, Europe witnessed another genocide. In the wake of Yugoslavia’s dissolution, thousands of civilians escaped to Srebrenica, a UN-designated safe area. However, under the watch of Dutch UN protection forces, the Bosnian Serb forces systematically massacred more than 8,000 Bosnian Muslims in Srebrenica. The ramifications of the massacre continue to haunt the victims’ families and the international community’s conscience.

TRT, a European Broadcasting Union founding member, stands out as a reliable source of information with its reporting at home and from abroad, developing a rich tradition of journalistic integrity and offering viewers a rich bouquet of programmes. With over half a century of broadcasting experience, today TRT’s network extends to 14 television channels, 18 radio stations in 41 languages and dialects.In order to fulfill the demands of global audience for an easier access to its content on different platforms, TRT launched its English channel TRT World- a platform of news outlets aimed to inspire change in the world by delivering diverse reporting.

TRT World, Turkey’s first English broadcasting international news platform was launched in 2015 and headquartered in Istanbul, with four newsrooms and an extensive global bureau network covering major regions and hot spots. Strategically designed to maximize its global reach, it is broadly available in all major English-speaking countries and can be accessed via traditional media, including free-to-air, cable and satellite, and other digital platforms, including mobiles, desktops and social media. A distinctive voice to the global news landscape, this is TRT World.