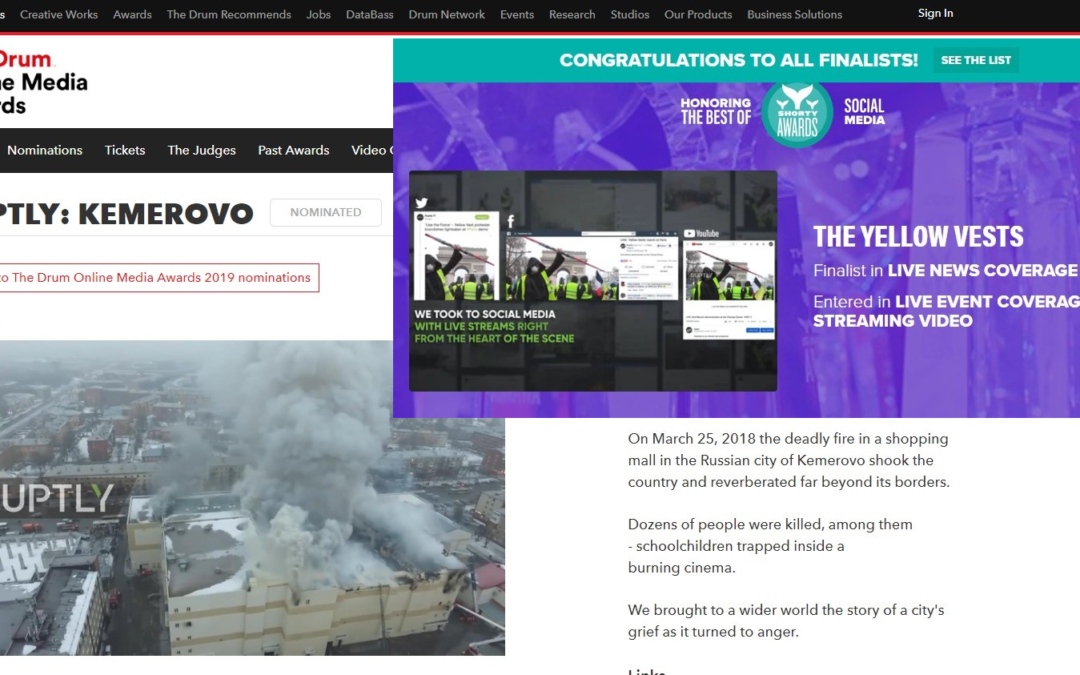 Ruptly, the award-winning global multimedia agency, has been shortlisted in The Drum Online Media Awards for Breaking News Story of the Year and has also become a finalist in the Live News Coverage category of the Shorty Awards with coverage of Yellow Vests protests.

“These nominations are reflection of the high quality, timely and impactful content that we capture. We uphold the highest standards of news delivery; whether it’s in breaking news, or in presenting a comprehensive and impartial account of the Yellow Vests movement.”

Nominated for Breaking News Story of the Year in The Drum Online Media awards, Ruptly’s coverage has been recognised for its depiction of a tragic event in Russia’s city of Kemerovo. As massive fire broke out in a local shopping mall, taking lives of dozens of people, Ruptly brought ground-breaking footage to clients in Russia and worldwide via the Ruptly Live platform; including aerial views of the mall and live images from the scene. Other contestants in the category include:  CNN, Sky News and ITV Central. http://www.onlinemediaawards.net/the-drum-online-media-awards-2019/breaking-news-story-of-the-year/kemerovo

Ruptly’s coverage of the Yellow Vests movement has also been shortlisted in the finals of the Shorty Awards in the Live News Coverage category. Here, it will compete with projects by Bloomberg Media and United Services Automobile Association. Ruptly’s live streams of the Yellow Vests protests started from the first days of unrest in France and provided a live window on the events as they unfolded; in real-time. Ruptly produced 125 hours of live content between November 2018 and February 2019, which was used by broadcasters and individuals in 24 countries; generating over 10 million views across YouTube and Facebook.  https://shortyawards.com/11th/the-yellow-vest

About The Drum Online Media Awards

The Drum Online Media Awards identifies the most innovative, engaging and stand-out news and views from across the globe.

About The Shorty Awards

The Shorty Awards honours the best individuals and organisations on social media, culminating in an annual awards show in NYC.