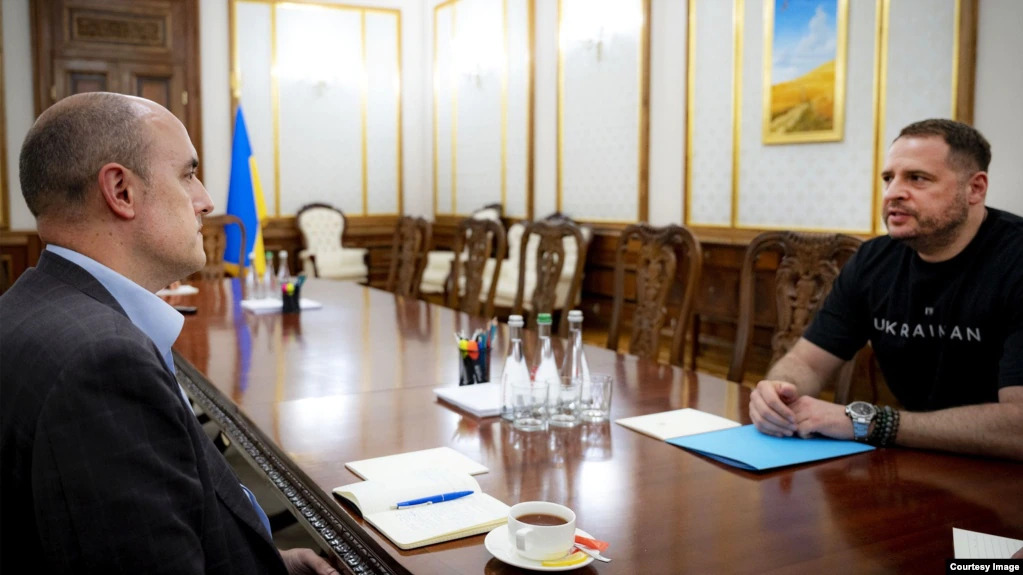 During a visit to the Ukrainian capital of Kyiv last week, Radio Free Europe/Radio Liberty (RFE/RL) President & CEO Jamie Fly met with top Ukrainian officials and RFE/RL journalists who have been reporting on the frontlines of Russia’s invasion of Ukraine.

Fly spent time with journalists from RFE/RL’s Ukrainian Service, who have put their lives on the line to deliver trustworthy, independent news to Ukrainian and international audiences. They have documented Russian war crimes, exposed the human cost of Russia’s attacks, and broken story after story about the Kremlin’s unjustified invasion.

“Russia’s illegal invasion of Ukraine has not stopped our brave journalists from delivering vitally important, independent news every day,” said RFE/RL President & CEO Jamie Fly. “From Kyiv to Crimea, RFE/RL journalists are risking their lives to show Ukrainians, and the world, the true horror of this inhumane and unjustified war.”

On April 29, RFE/RL journalist Vira Hyrych was killed in Kyiv after a Russian missile strike hit the residential building where she lived. In June, Hyrych and other journalists killed during the war were posthumously recognised by Ukrainian President Volodymyr Zelenskyy. Fly met with Hyrych’s parents and son and visited her gravesite.

During his visit, Fly also met with Ukrainian officials, including Andrii Yermak, Head of the Office of the President of Ukraine, First Deputy Foreign Minister Emine Dzhaparova, Minister of Culture and Information Policy Oleksandr Tkachenko, members of Parliament, and representatives of civil society groups and independent media outlets. Fly discussed RFE/RL’s efforts to provide truthful reporting about the war, as well as work to reach audiences inside Russia and newly-occupied areas of Ukraine.

He also raised the case of RFE/RL contributor Vladyslav Yesypenko, who was sentenced to six years in prison on February 16, 2022 by a Russian-controlled court in occupied Crimea. Detained by Russia’s Federal Security Service in Simferopol on March 10, 2021, he was eventually charged with possession and transport of explosives, a charge he denies. Yesypenko is the recipient of the 2022 PEN/Barbey Freedom to Write Award.

RFE/RL’s Ukrainian Service sets a standard in the Ukrainian media market for independence, professionalism, and innovation. Since the beginning of Russia’s war against Ukraine on February 24, Ukrainian Service videos have been viewed over 111 million times on YouTube alone. The service’s comprehensive coverage includes the award-winning reporting of its Donbas Realities and Crimea Realities websites and “Schemes” investigative reporting team.