A curious sight has emerged in the economically flourishing cities of China: Apartment buildings in which construction halts midway. Locals refer to them as “ghost castles.” Residents of one such building in Wuhan live in rooms without water or electricity, struggling under the financial weight of repaying the mortgage for an unfinished home. This program examines the shadow behind real estate development through the turmoil faced by the residents who have become victims of a ghost castle. 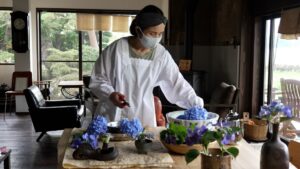 Savor the food culture of Hida Takayama with the Kogawa family. For hundreds of years, people in this area of Japan have let the seasons be their guide as to what to eat. Natural farming produces delectable vegetables for dining. Herbs from the garden make their way into tea. Traditional dishes include salted squid and cucumber mixed with sake lees, and river fish stewed with sansho peppers. It’s all part of what’s known as the satoyama lifestyle, relying on locally produced ingredients while aiming for zero waste.

The best of today’s sumo! Enjoy daily highlights of this dynamic sport with background info and play-by-play commentary adding to the excitement!

The Pride of Namie

How a Beloved Sake Made its Way Home

People in Namie loved their hometown sake, Iwaki Kotobuki. The brewery, however, was one of the places in Fukushima prefecture devastated by the Great East Japan Earthquake. The owner never lost hope of restoring production, even though he had to move to a neighboring prefecture. With support from back home, he succeeded in recreating the taste ten years after the disaster.