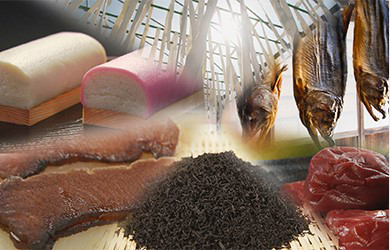 This episode showcases Japan’s long history of food preservation and the ingenious methods that have been developed over the centuries. Whether by employing salt, the open air, or a natural fermentation process, careful preservation has allowed for the enjoyment of seasonal delicacies all year round. Dive for hijiki seaweed, try your hand at creating kamaboko, and feast your eyes on many other household favorites like umeboshi.

Being surrounded by ocean on all sides, Japan has long relied on the ocean for sustenance. Numerous fishing and cultivation methods have been developed over the centuries to ensure the sustainability of such resources. From top quality fish raised on olive leaves and orange peels, to cultivated seaweed and shellfish, learn about several robust methods with our reporters in this special instalment of “Trails to Oishii Tokyo,” focusing on Japan’s fisheries.

Episode 5
Climate change is a looming crisis. One way to reach net-zero carbon output is to reduce the use of coal. In developed countries such as Japan technology can help reduce emissions, but a documentary from our partner station KCET shows that cutting back on coal is not so clear cut for countries like South Africa, where coal mining is still important. How can developed and emerging countries work together to move away from coal? We will mine for methods of ensuring a carbon-neutral future.

The impact of climate change on the world’s seas is increasingly severe. The incidence of extremely high ocean temperatures known as marine heatwaves is likely to increase. Oceans play a vital role in mitigating climate change, taking in heat and carbon dioxide from the atmosphere. But this intake has warmed the ocean and made seawater more acidic, putting undersea life at risk. With our US partner station KCET, we zero in on the health of our seas and look at efforts to protect marine life.

Fresh insights into Japan. Stories behind Japanese life and culture through the eyes of Peter Barakan, a 45-year resident and watcher of Japan.