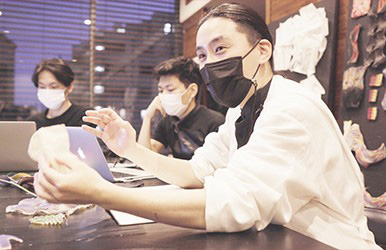 Designer Nakazato Yuima first took part in the Paris Haute Couture Fashion Week in 2016. The event is widely regarded as the pinnacle of fashion art. By now, he’s become accustomed to big runways, but the pressure is always on to produce something that goes beyond what he’s already done. Nakazato’s also committed himself to creating collections that are ecologically sustainable. Follow along as he makes his way through a hectic half-year, leading up to the next show.

From a boyhood in Mongolia, Hakuho rose to Yokozuna, the highest rank in the competitive world of Japanese sumo. He held that position for a record-breaking 14 years. But he struggled with the thought that he would never earn the love of the Japanese people. With the help of his trainer and his devoted family, he overcame physical pain and public disapproval to make his mark on the sumo ring and take his place in history. We follow the remarkable career of a rikishi who came to define his era.

BOSAI: Science that Can Save Your Life

Japan has a long history of natural disasters. BOSAI explores how to overcome them and save lives with the power of science.

NHK Symphony Orchestra Family Concert presents highlights from a family concert originally performed in the summer of 2020 by the NHK Symphony Orchestra conducted by blossoming international conductor Keitaro Harada. With an introductory segment by Maestro Harada and excerpts from well-known classical masterpieces played for speed and a competition for the instruments with the lowest pitch, NHK Symphony Orchestra Family Concert provides listening enjoyment for the whole family and delight even the classical music novice. It is available for free through NHK WORLD–JAPAN On Demand for three months after the broadcast.