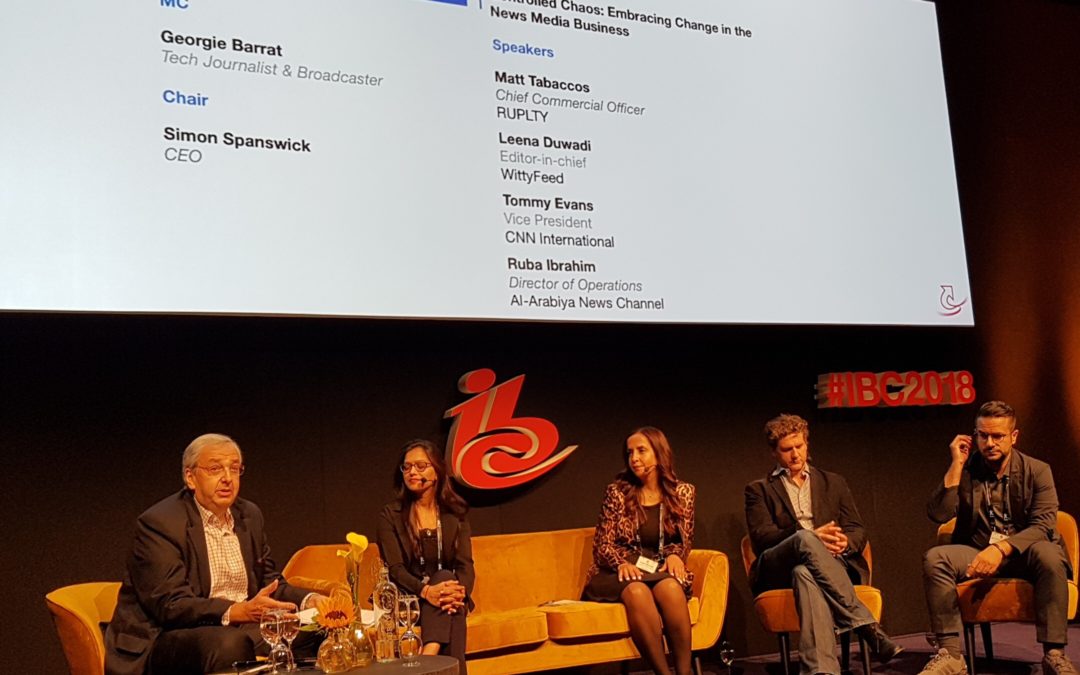 At the International Broadcasting Convention (IBC) held every year in Amsterdam, news was the focus of some of the conferences at a time when news media organisations, broadcasters in particular, face a number of challenges from new players, social media platforms and questions about their perceived lack of credibility and balance in some countries.

The AIB was at the centre of one of these conferences with its CEO, Simon Spanswick, chairing a session, entitled “Controlled chaos: Embracing change in the news media business”.

In this meeting, senior representatives from well-established broadcast organisations as well as from relatively new players, discussed the issues they faced and how they worked to best deal with these.

Panellists explained how their respective organisations were embracing media changes, both as regards the use of technological innovations, and the need to meet audience expectations.

WittyFeed understood that the whole concept of content on the Internet was shifting, and WittyFeed idea from its creation in 2014, was to offer “content for the Millenials, produced by Millenials,” Duwadi said. From its beginning, WittyFeed proposed “vivid formats, ranging from stories to videos which differentiate it from other large Indian media companies that have hundreds of millions of users, listeners and viewers.”

Al-Arabiya has an English website also and is present and very active on digital platforms and social media.

Ibrahim explained how different content was tailored in content and length to meet the diverse requirements of the multiple platforms, showing examples of reports for online and mobile devices.

Spanswick asked how the channels were tackling the issue of addressing audiences across the entire Arab world. Ibrahim said that Al-Arabiya was primarily targeting audiences in the Gulf area, where audiences share the same language, issues and challenges, covering news, business and sports, and offering documentaries. Following the “Arab Spring”, Al-Arabiya’s extensive, but still limited resources didn’t allow it to cover all the news across the entire Arab world, so Al-Hadath was tasked with covering more specifically news and issues about Yemen, Iraq, the Levant and North Africa.

Tommy Evans, VP of CNN International and CNN London bureau chief, said that “it was the golden age of news. US President Trump makes a lot of news and news is good for CNN and other news organisations.”

The key to success, he added, was “good content”, but he also advised for a varied and balanced mix between hard and soft news. “You can’t expect the audience to be brutalised by bad news constantly. You have to have a healthy mix of stories,” Evans warned.

CNN was established as a cable news network in 1980, but gained international recognition when it was the only channel broadcasting from inside Iraq from the beginning of the first Gulf War in January 1991. CNN launched its website, CNN.com in August 1995. It is now one of the most popular news websites in the world.

These include an offer of real-time and archive visual news content to all media, from broadcast networks large and small to online content providers, including broadcast, digital and mobile platforms.

Ruptly value proposition, Tabaccos said, was “to try to be first, to pioneer new ways of telling stories.” Ruptly was one of the first news organisations to fly drones over war zones, which was the kind of content that resonated over the different platforms, online and broadcast, he said.

“Technology has been one of our main selling points,” Tabaccos added pointing out that Ruptly now gets some 500 million views across platforms every month. The idea is to service broadcasting organisations, start-ups and ordinary users, through flexible models, he said.

Tabaccos announced that Ruptly had just expanded its offer with Ruptly Pass, a “disrupting” subscription-based model “for individuals and growing media entities”, which gives users unlimited access to video and live events on the service for €12.50 a month.

The “Controlled chaos” conference provided a comprehensive overview of the diverse and imaginative approaches adopted by just four media organisations with different audiences to address some of the many challenges faced by the whole broadcast news media industry today.