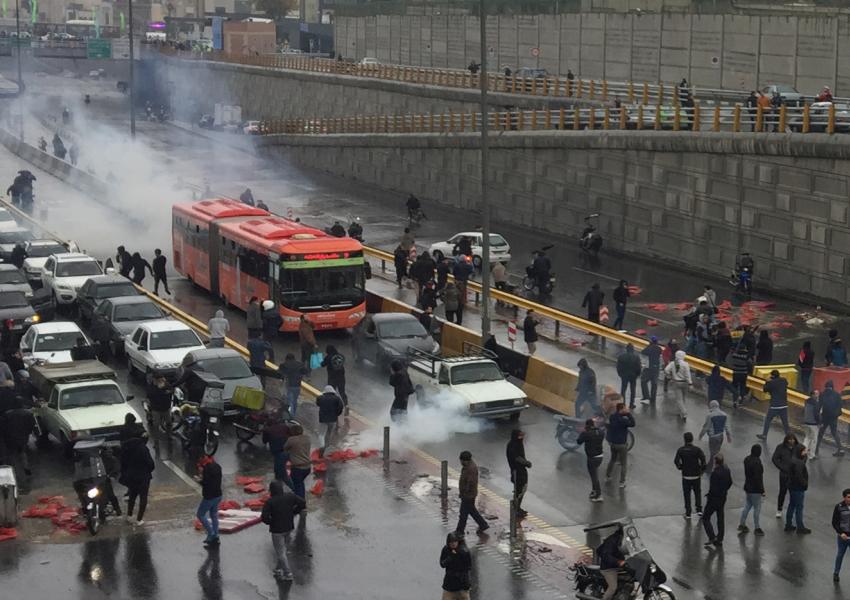 The harassment of BBC Persian staff and their families in Iran has been stepped up during protests in the country, the UN has heard.

In an urgent complaint, UN Special Rapporteurs heard anonymised testimony from a number of the affected journalists which makes clear the gravity of the current situation which they now face. Elderly relatives have been subjected to solitary confinement, degrading prison conditions and interrogation, and express threats have been made to journalists’ safety in the UK and elsewhere.

In addition, over the past number of weeks Iran is known to have taken extra-territorial action against a number of individuals considered to be critical of the regime. The Iranian authorities claim that foreign broadcasters are encouraging dissent within Iran – in essence blaming the protests on the media.

BBC Persian journalists are extremely concerned for their own safety and wellbeing, and for that of their family members in Iran.

BBC World Service Director Jamie Angus says: “Following the civil unrest, we have seen some deeply disturbing developments regarding the state-backed harassment of BBC Persian staff in London and their families in Iran.

“Over the last few weeks, family members of BBC staff have been called in for questioning, had their passports confiscated and told that they must ask their relatives to stop working for the BBC or face the consequences. At the same time, the Iranian media has cited BBC Persian television as allegedly encouraging unrest and violence in Iran.

“While BBC Persian staff have borne the brunt of this harassment over many years, the Iranian authorities are widening their offensive against journalists from other media outlets reporting on the protests and have imposed an internet shutdown. There can be no doubt that these actions constitute a clear breach of the universal human right of free expression. We call on all those who believe this fundamental right should be powerfully defended to support BBC Persian and all journalists who report on Iran.”

This is the first time BBC Persian journalists have filed a communication with the Special Rapporteur on Extrajudicial, Summary or Arbitrary Executions.

Caoilfhionn Gallagher QC and Jennifer Robinson, international counsel for the BBC World Service at Doughty Street, say: “BBC Persian journalists are facing harassment and persecution because of their essential work reporting on events inside Iran. This decade-long harassment campaign against BBC Persian staff has included a national security criminal investigation, asset freeze and ongoing targeting of their family in Iran.

“This recent escalation has coincided with a brutal crackdown upon dissent within Iran, and has included express threats being made by state officials to their families about the safety of BBC Persian journalists outside Iran. This places the journalists and their families at grave risk, but it also hampers the ability of international organisations and other States to hold Iran to account for its response to protests within Iran.

“The UN Special Rapporteur on Extrajudicial, Summary or Arbitrary Executions, Agnes Callamard, has repeatedly raised concern about impunity for the persecution of journalists and the need to take early action to protect against and prevent violence against journalists. We call on the UN to condemn Iran’s attempts to intimidate and terrify BBC Persian journalists into silence, at a time when their work is needed more than ever.”

Michelle Stanistreet, NUJ general secretary, says: “This campaign of harassment has to stop. This cruel and inhumane tormenting of families has to cease. The Iranian government must recognise that this harassment of individuals and their families are clearly understood by the international community for what they are: an attack on journalism and on press freedom, one that the NUJ and everyone who cares about media freedom will not allow to be successful.”

The three mandate holders hearing the complaint – the Special Rapporteurs on the Promotion and Protection of the Right to Freedom of Opinion and Expression, Human Rights in Iran, and Extrajudicial, Summary or Arbitrary Execution – had already acknowledged the deteriorating situation in Iran in a UN statement issued on 22 November 2019.

There are many disturbing and credible reports of killings of protestors on a large scale. Grave concerns have been expressed that the authorities may be using excessive force against those participating in the protests. In addition, the authorities have introduced measures to curtail the public’s access to news and social media, with a nationwide internet shutdown.