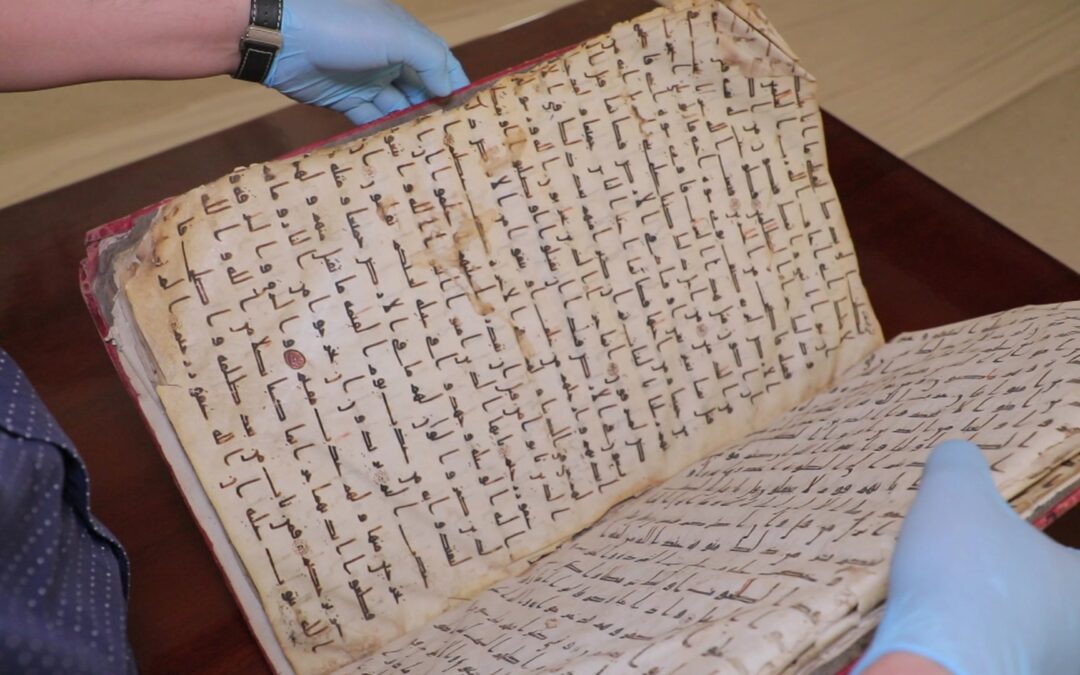 The ancient “Katta Langar” Qur’an, named after the Uzbek village – its centuries-long home – is the subject of a 40-minute documentary now live on the website bbc.com/uzbek and the BBC News Uzbek YouTube channel.  In Katta Langar Qur’oni izidan (In search of Katta Langar Qur’an) BBC News Uzbek teams up with Uzbekistan’s popular TV channel, Sevimli TV, to trace the twists and turns in the life of the unique manuscript.

The documentary editor, BBC News Uzbek’s Diloram Ibrahimova, says:  “Telling the story of the rare 8th century Qur’an demanded great sensitivity and a very careful approach.  Our film is a culmination of months-long collaboration between BBC News Uzbek and Sevimli TV and showcases the expertise and creativity of the BBC teams in London and Sevimli TV film crew in Tashkent.”

The idea of the joint project came from the Head of Sevimli TV, Firdavs Abdukhalikov, following the signing of a memorandum of understanding on editorial collaboration with BBC News Uzbek.  He supported the project from the start.  Throughout the month of Ramadan, as the documentary was being filmed, Sevimli TV featured daily primetime series in which the fascinating discoveries made by the joint team were shared with the channel’s viewers.   Firdavs Abdukhalikov  says:  “Our joint project is a great contribution to the research into the ‘Katta Langar’ Qur’an. I am really happy that Sevimli TV viewers can now watch the BBC News Uzbek film about this manuscript that is unique in the Muslim world.”

Joint BBC and Sevimli TV team travelled to the remote mountainous village of Katta Langar in Uzbekistan, home to the manuscript considered to be one of the very first written versions of the Qur’an.  The documentary presenter and producer, Luiza Iskandariy, says:  “It was fascinating to learn how this little village harboured its great treasure.  Throughout our journey every new discovery kept adding new questions and intricacies to our story, also reflecting the history of the region.”

The film probes various explanations of how the “Katta Langar” Qur’an appeared in Central Asia and how its pages ended up in different countries.  Luiza speaks with the villagers whose ancestors and relatives trace their proud guardianship from the 15th century.  The cherished manuscript, which survived a journey from Arabia via Iran and Afghanistan to Central Asia, was seized many times – by the colonising tsarist Russian army, by the KGB in the Soviet times, and finally, for safekeeping by newly independent state of Uzbekistan.  The investigation also takes the joint crew to an Uzbek village whose residents claim their ancestry from the Arabian Peninsula and still display elements of the Arab culture.

The documentary establishes that the bulk of the missing pages – a total of 81 – are kept in the St Petersburg Institute of Oriental Manuscripts.  Twelve pages are in treasury of the Spiritual Directorate of the Muslims of Uzbekistan in Tashkent while random pages are in other locations in Tashkent, and in a museum and a library in Bukhara.  An estimated hundred pages of the “Katta Langar” Qur’an are still unaccounted for.

BBC News Uzbek, which has a weekly reach of 2.3m across platforms, offers content tailored for Uzbek-speakers in Uzbekistan as well as Afghanistan and the rest of the world, and is one of the largest international news providers in the region.  In addition to the website bbc.com/uzbek, BBC News Uzbek connects with audiences via Facebook, YouTube, Instagram, Twitter and Odnoklassniki as well as Telegram.  The BBC’s 10-minute TV news bulletin for Uzbek-speakers in Afghanistan has a weekly audience of 1.8 million.