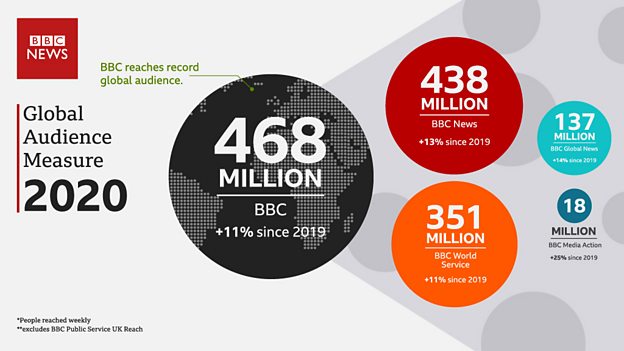 BBC News accounts for 438.4m of the total with an annual increase of 13%. Digital platforms are key to the success, with an increase of 53% in BBC News users. A total of 151m users now access BBC News digitally according the annual Global Audience Measure which measures how many individuals the BBC reached weekly with its news and entertainment content in the year 2019/20.

Tony Hall, BBC Director-General, says: “We are without question one of Britain’s strongest and best-known brands, synonymous with quality and accuracy worldwide. Our international news services rank first for trust and reliability and the World Service remains a beacon of democratic values. Independent research shows that there is an exceptionally high correlation between places where people are aware of the BBC and places where people think positively about the UK. More than that, the BBC helps UK trade. This has perhaps never been more important. The UK will forge a new relationship with the world in the decade ahead, built on an ambitious vision of ‘Global Britain’. Success will mean drawing on all our considerable international assets, and that means unleashing the full global potential of the BBC.”

In late March 2020, as the Covid-19 virus spread and trusted sources of information were in demand, BBC News recorded the highest reach of any international media organisation in the world with 310m people accessing coverage across 42 languages.

Other highlights of the 2020 Global Audience Measure:

The top 10 countries by BBC News audience are:

The Global Audience Measure is an annual update of how many people are consuming the BBC weekly for all services in all countries across all platforms (television, radio, website and social media). Key to this is de-duplication i.e. ensuring that a person who consumes multiple BBC services or platforms or on multiple devices is not counted many times in the top level totals, which means those totals are often not the sums of their constituent parts.

The BBC’s Director-General, Lord Hall, has published a blog about the BBC’s global role. Read it here.