AIB concerned over treatment of journalists in Azerbaijan

The Association for International Broadcasting has today expressed its concern about the welfare of Azerbaijani journalist Khadija Ismayilova. 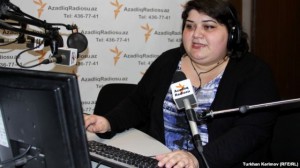 Ms Ismayilova (pictured left) is an investigative journalist who contributes to the award-winning Radio Azadliq, the Azerbaijani-language service of AIB Member RFE/RL. This week she has been summoned to the Prosecutor General’s office in Baku accused of spying for the United States against Azerbaijan. Ms Ismayilova and RFE/RL – an international broadcaster based in Prague – vociferously deny the charges which they say are completely without foundation.

“Azerbaijan has consistently created obstacles for journalists reporting from and within the country,” commented AIB chief executive, Simon Spanswick. “AIB and its Members are concerned that Khadija Ismayilova is the subject of new charges that are without foundation. We call on the Azerbaijani authorities to drop the charges and allow Ms Ismayilova and all other journalists in the country to carry on their work free from intimidation and threats to their lives and those of their families.”

Ms Ismayilova has been subjected to a series of attacks over recent years as she has undertaken comprehensive journalistic investigations into the Azerbaijani government. In 2012, her apartment was bugged and illegally-obtained intimate footage of her and her boyfriend released on the Internet. Despite these intimidations, Ms Ismayilova has continued her work to expose corruption in the country.

“As a participating State of the Organisation for Security and Co-operation in Europe, Azerbaijan has committed to respect freedom of the media,” notes Spanswick. “It is important that Azerbaijan upholds this commitment and offers protection to journalists working in the country.