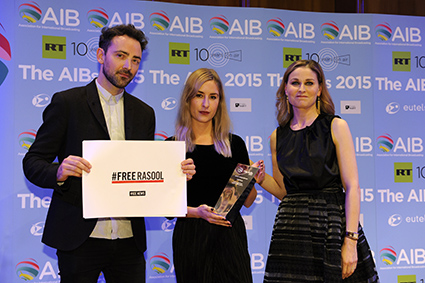 The winners of the 2015 AIBs were announced on the 4th November  at a gala dinner at LSO St Luke’s in London. These annual international broadcasting awards are now in their eleventh year and celebrate the best in radio, TV and online – journalism, programmes and talent. The AIBs are judged by an independent and international panel of distinguished media professionals representing broadcasting across the world and they ensure that the awards are judged independently from commercial influence. The chosen winners demonstrate the best in engaging, powerful, moving and innovative reporting and investigation from entries which are submitted by countries in every continent of the world.

Simon Spanswick, AIB CEO said: ”The entries in 2015 demonstrated the continuing dedication of programme makers and journalists to uncover important and challenging stories, to take risks, both personally and professionally and to work expertly to investigate and explain complex subjects. The entries educate, entertain and engage their audience using the latest technologies at their disposal. We have seen important and sometimes harrowing stories brought to light, the power of the voice to captivate as well as exciting and engrossing coverage of sporting events. Once again the judges have had the hard but rewarding search for the best out of a very strong set of entries.”

This year’s awards were hosted by CNN’s Hala Gorani. Hala is based in London and anchors The World Right Now, with Hala Gorani, which airs every weekday evening. As an accomplished international journalist, Hala frequently goes into the field to report on major breaking news stories. Most recently, she’s been covering the refugee crisis in Europe and the Middle East.

The AIBs 2015 | Winners and highly commended finalists are:

The winner is CNN for its coverage of the migrant crisis in the Mediterranean.

The winner is Channel 4 for My Last Summer, a programme that gathered together five terminally ill patients to share their experiences of coping with the last months of their lives and the effect on their families and friends.

Antena 3 for The Thing with Rom-Mania

Verve Productions for Filming My Father: In Life and Death

The winner is Al Jazeera Media Network for Al Jazeera Investigates – Broken Dreams: The Boeing 787. This was a disturbing tale of corporate greed as the world’s major aircraft manufacturer put profit ahead of safety.

Mongoose Pictures/Quicksilver Media for Outbreak: The Truth about Ebola

The winner is VRT for The Price of Cheap Food. This documentary looked at the never ending price war between supermarkets to lure consumers in with the cheapest possible food, asking who pays for this cheap food and whether a Pandora’s box has been opened in which food producers – principally farmers – have become the first victims.

BBC Northern Ireland for Spotlight: A Woman Alone with the IRA

Channel 4 for The Paedophile Hunter

The winner is Flying Cloud Productions for Human Harvest, a programme that investigated claims that first emerged from China in 2006 that state-run hospitals were killing prisoners of conscience to sell their organs.

The winner is Strix Television (part of the Nice Group) that produced The Museum for SVT. The Museum is a competition show in which knowledge, excitement, history and the present day are woven together in a children’s programme that is just as much fun for adults.

BBC for Being Me – A Newsround Special

deMENSEN for The Blacklist – Getting Married

The winner is Channel 4 for Drugs Live: Cannabis on Trial which was a ground-breaking scientific trial looking at the effects on the brain of two different forms of cannabis – ‘skunk’ and ‘hash’.

Flimmer Film for Death – A Series about Life

The winner is VICE News for Russian Roulette, Dispatch Fifty Seven in which Simon Ostrovsky spoke to residents in Eastern Ukraine which are innocently caught up in the middle of a bloody campaign – and who are dying as a result.

The winner is Blue Chalk Media for Burned Girl. Ragini is one of millions of children who are suffering from severe burn injuries. Blue Chalk Media travelled to India to document Ragini’s story through video and still photographs.

ITN for On Assignment: Heroin on the East Coast

The winner is by TBI Media with Snappin’ Turtle Productions for D-Day 70 Years On. The BBC brought the UK together in a tour de force production to mark the 70th anniversary of the D-Day landings – the programme was broadcast on TV and radio, and screened in cinemas across the country.

Kansai Telecasting for Bunraku – Soul of the Art

The winner is Bayerischer Rundfunk for Do Not Track which explored how information about you is collected and used as you browse the web.

The winner is BBC World Service for its Ebola Coverage, one of the biggest stories the international broadcaster covered during 2014.

The winner is RTE Radio One for Voices which, over 12 episodes, explored issues like suicide, abortion, addiction, and raised questions about who we are and how we live.

Radio Free Europe/Radio Liberty for Tradition of the Blade

The winner is BBC World Service for The Lost Children of the Holocaust. At the end of the Second World War, the BBC began a series of special radio appeals on behalf of a group of children who had survived the Holocaust but were now stranded in post-war Europe. 70 yearson, Alex Last tries to find out what happened to the children named in the recording.

The winner is BFBS for Children of Belsen, a compelling anniversary story that deserved to be told and to reach a wider audience.

The winner is Christiane Amanpour, CNN’s chief international correspondent and anchor of the

The winner is Kathryn Ryan  of Radio New Zealand, where she anchors the daily Nine to Noon, a

The AIB Founders’ Award is in recognition of Mike Wooldridge’s lifetime work as an outstanding correspondent.

The inaugural AIB Lifetime Achievement Award is in recognition of Larry King’s remarkable career on radio and television, and his extraordinary impact on the news industry.